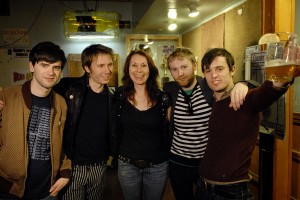 ”Is this Danzig?” asked Franz Ferdinand guitarist Nick McCarthy, turning from his pool game to concentrate on the song blaring from the jukebox at the Silhouette Lounge in Allston.

His bandmates, sitting in a booth nearby, waited a beat to see if he was kidding. It’s not an uncommon practice among these guys, whose wits are as sharp as their notoriously keen fashion sense.

Everybody laughed and returned to their pints of Guinness and Samuel Adams Summer Ale. More than anything, they were happy to be out of the cement bunker that is the Agganis Arena, where they had played earlier that night. They had bounded into the bar like schoolboys on holiday and soon were cracking quips and begging quarters for pool, with Thomson capturing it all with his camera.

These are not the kind of holier-than-thou rock snobs who might take someone down a peg for confusing Idol’s pop rock with Danzig’s faux-satanic metal. But this Glasgow-based group is serious about music, a topic that peppered the conversation all afternoon.

”I like Danzig as well,” said his wife, Esther, stylish in a summery vintage dress and red lipstick.

The lads, on the other hand, were a bit rumpled, if still snazzy, in their vintage dandy chic. In fact, even though they’d woken up shortly before the Silhouette rendezvous — singer/guitarist Alex Kapranos, dressed in sleek black-and-gray striped trousers, and bassist Bob Hardy, in a black-and-white striped sweater — looked ready to shoot a video for one of the band’s new wave-flavored dance-rock songs.

”Paul just got up a half an hour ago,” someone teased.

”I sleep really deep on the bus,” he said sheepishly.

The band had good reason to be tired. Halfway through a six-week US tour, the four of them haven’t been home in ages.

”The last time I was in Glasgow was January,” said Hardy.

”That was the last time I was there, too,” Kapranos added.

Not that they were complaining, mind you. It’s just that the rise to the top since the release of their 2004 self-titled debut, which featured the sly, kinetic groove ”Take Me Out,” has been meteoric to say the least. Perhaps you remember their performance with the Black Eyed Peas and Gwen Stefani in a genre-bending medley at the 2005 Grammys?

Despite recent hobnobbing with pop princesses and rap royalty, the group feels right at home amid the grizzled regulars at a dive bar on a weekday afternoon.

”In Glasgow, we’ve got pubs like this,” Hardy said, describing the old guard of midday drunks that gives way to art school kids dropping in for a pint after class.

Hardy, who is English, moved to Glasgow to attend the Glasgow College of Art, where he met his future bandmates. It’s also where he met longtime pal Brett Saiia, who plays banjo in the local up-and-coming alt-country/art-rock band Frank Smith. This friendship means that Boston tour stops are often an occasion for making merry. When Saiia turned up for a pint at the Silhouette, the fellow musicians quickly found common ground once again.

”There’s no Frank Smith [in the band],” Saiia said, as he explained his band’s moniker.

”That’s like us,” Kapranos said, laughing. ”There’s no Franz Ferdinand either.”

Even though the pints and conversation had run long and the guys were late leaving the bar for sound check, McCarthy wasn’t overly eager to get back to the venue. Blinking happily in the spring sunshine, he had a more important mission in mind: a head-to-toe corduroy suit, which he traipsed up and down Commonwealth Avenue to find.

And there it was, or at least part of it, at Urban Renewals. The tawny shoulders of a corduroy blazer shone out amid a sea of dark sharkskin and polyester jackets.

”I’m not so sure about the shoulders,” McCarthy said as he slid it on over his button-down shirt and sweater. But it was quite flattering. And once he had been convinced and had borrowed $6 of the $8 he needed to pay for it, he was dressed to kill in corduroy — and ready to rock.